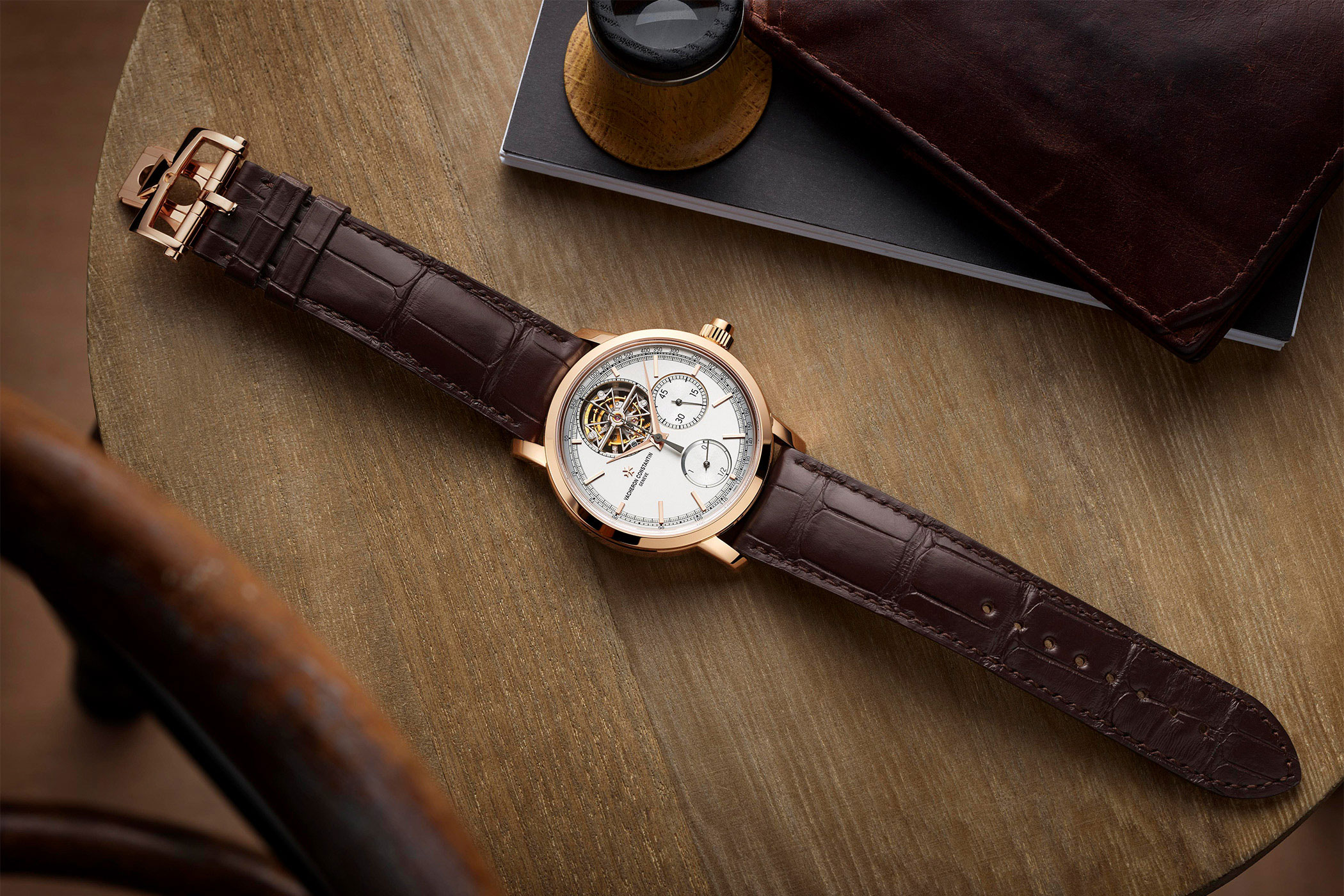 Vacheron Constantin, the oldest active watch manufacture that has been producing without interruption, celebrates its 267th anniversary in 2022. The Traditionnelle collection is the embodiment of this long-standing tradition. It skilfully expresses the sophisticated principles of 18th-century Geneva Haute Horlogerie and finds the right balance between perseverance and contemporary design. The signature watch aesthetic of the Traditionnelle collection allows us to understand the philosophy and history of watchmaking a little better, and that is precisely what makes it so appealing.

A circular, stepped case, the narrow bezel and dauphine-shaped hands; these are the stylistic codes that each timepiece in the collection embraces – which can be seen as a classic alternative to the Overseas. From simple calendar complications, to the complex tourbillon, the collection offers a multitude of watchmaking refinements, let’s explore some of its highlights.

In 2018, the Traditionnelle collection expands its range with the addition of two new timepieces. With two complications, the complete calendar and tourbillon, Vacheron Constantin is infusing its traditional watches with the expression of modernity. With the Collection Excellence Platine, both timepieces were also produced as a limited edition made from 950 platinum.

Manufacturing a tourbillon still requires the same technical know-how as two hundred years ago, when it was invented by Louis Breguet. In other words, this beautiful device is reserved for only a few accomplished watchmaking houses. As one of the most prestigious devices that wristwatches can boast, Vacheron Constantin also used the tourbillon for the dial design of this timepiece.

The watch’s crown jewel, the open tourbillon cage in the shape of a Maltese cross, adorns the opaline silver dial. The tourbillon movement indicates the hours and minutes via central hands, while the small seconds at 6 o’clock are visible on the tourbillon. Surrounding the tourbillon are gold hour hands and dauphine hands with double facets.

The timepiece marked a first for the Manufacture, as inside the 41 mm case in 18-carat 5N rose gold works the Calibre 2160, the first self-winding tourbillon movement entirely developed and manufactured by Vacheron Constantin. Through the transparent sapphire crystal case back, the quiet frequency of 2.5 Hz and the oscillating weight made of 22-carat gold are visible, allowing the observer to easily follow the captivating rhythm of the mechanism. The flat calibre is made of 188 individual parts and has a power reserve of 80 hours.

Astronomical movements inspired Vacheron’s conception of the second timepiece, depending on the position of the moon in relation to the earth, it is also visualised on the moon age display; thus the side of the sun is either completely visible (full moon), partially visible (quarter of the moon) or not visible at all (new moon). The precise moon phase display only requires correction every 122 years. The Manufacture complements this astronomical picture with the complete calendar. It consists of the day of the week, date and month.

This practical and noble complication is powered by calibre 2450 QCL. It consists of 308 individual parts, including the oscillating weight made of 22-carat gold, which can also be viewed – as with its counterpart – through the open case back. The calibre manages to beat at a frequency of 4 Hz and has a power reserve of 40 hours.

The aesthetic balance is achieved by the opaline-silver dial, which is characterised by gold hour hands and double-facetted dauphine hands. It is precisely these aesthetic features that characterise a timepiece from the Traditionnelle collection, as described earlier. The arrangement of the day display between 9 and 10 o’clock and the month display, which is placed between 2 and 3 o’clock, complete the design of the watch.

The development and construction of a chronograph is a particularly complex undertaking due to the multitude of moving components. This complication has long been one of Vacheron Constantin’s watchmaking specialities. In this timepiece, the Manufacture combines the precision of a monopusher chronograph with the sophistication of the tourbillon, without compromising their origins.

Defying gravity, the tourbillon on this timepiece – as is often the case – does not appear on the lower side of the dial, but is enthroned evocatively above it, at the 12 o’clock marker. Here it is interesting to note that the tourbillon cage is driven by an intermediate wheel of the running seconds display instead of by the drive of the fourth wheel. This configuration allows the upper plate to be highly exposed, providing an even more spectacular view of the tourbillon. As a result, the tourbillon additionally functions as a small seconds display.

A watch with a view is the best way to describe the addition to the Traditionnelle collection that was launched in 2021. These two versions of the Traditionnelle Complete Calendar Openface combine the finesse of an open-worked dial with the technology of a complete calendar accompanied by a moon display.

Catching a glimpse of the mechanisms of a working clockwork can have quite an impact. When gear wheels engage and the balance wheel begins to oscillate, the rush of the mechanism is complete. The fascination that emanates from the exposed movement mechanics and the work involved are immediately palpable for everyone.

The upper part of the sapphire crystal dial features a guilloché segment and applied gold indices surrounded by an opaline altitude ring that is also slate grey. The day and month are indicated by central dial apertures below 12 o’clock, while the date is visible through a central hand at the edge. The resulting dial rests on the sapphire discs in which the apertures for the days and months are set. The full calendar is complemented by the display of the moon age and precise moon phase.

The airy design allows a direct view of the various components of the movement, including the bridges and main plate. The anthracite grey colour scheme highlights the calibre 2460 QCL/2, especially in its construction and mechanical performance. At the heart of both versions, its 312 components represent an evolution of the Calibre 2450, the first self-winding movement conceived and developed entirely by Vacheron Constantin. The calibre 2460 QCL/2 is equipped with a stop-seconds mechanism and operates at 4 Hz.

The next timepiece in the collection is as beautiful as it is technically sophisticated. It shows once again how Vacheron Constantin translates the language of tradition into the present. With the harmonious colour combination of platinum and salmon found on the dial, the chronograph version of the Traditionnelle with perpetual calendar refers to its special heritage. The elegant design is based not least on the perpetual calendar complication.

As the name suggests, this watch features one of the great complications that offers the manufacture a large playing field. The perpetual calendar; it automatically takes into account months of thirty or thirty-one days and leap years. It only needs to be corrected at the turn of the century if this falls on a non-leap year, i.e. the year is not divisible by four. Vacheron Constantin particularly excels with perpetual calendars in combination with other complications, in this timepiece it is the moon phase display and the chronograph.

But let’s take a closer look at how this timepiece displays the time. The time is indicated by the characteristic Dauphine hands and indices in white gold, while the chronograph and date functions are shown by blued steel hands. The 30-minute chronograph counter and small seconds are balanced and symmetrically arranged. The phases of the moon appear on a platinum disc at 6 o’clock, which is integrated into a hand date display. The day, month and leap year cycle are visible through apertures in the upper part of the dial. The technical character of the model is underlined by a rotating tachymeter scale which, thanks to the positioning of the chronograph seconds hand, allows the average speed to be measured over a distance of 1000 metres.

As if that were not enough, the inside of the watch is also filled with history. Inside, the calibre 1142 QP works with manual winding. This chronograph movement, which has been supplemented by the perpetual calendar, is one of the most historically significant calibres for Vacheron Constantin. It originated in the 1940s and is distinguished not least by its aesthetics and its construction. The reliability and precision, which are reinforced by a column-wheel system, also make the calibre, which consists of 324 components and runs at a frequency of 3 Hz, a real eye-catcher. The power reserve here is 48 hours.

The special orchestration of the movement, which can be admired through the sapphire crystal case back of the timepiece, perfectly illustrates its technical intricacies. The Côtes de Genève decoration on the bridges, the hand-cut components, all add up to a coherent picture.