This article is part of our special report: the upcoming challenges of the telecom industry.

The EU’s standardisation strategy is trying to prevent the lagging of European companies but might open the door for the regionalisation of international standards.

Earlier this year, the European Commission presented its standardisation strategy which aims to regain its leading position in the setting of international standards, a strategic objective in terms of digital sovereignty.

Standard-setting bodies are usually open to everyone and based on consensus-building between technical experts. However, this open model also means that companies with more resources can send in higher numbers of specialists whose sole job is to influence standardisation.

“The weight of Europe in standardisation bodies has been eroded by the growth of American and Asian companies that have deeper pockets to invest in trying to influence the technical discussions,” said Santiago Tenorio, director of Network Architecture at Vodafone. 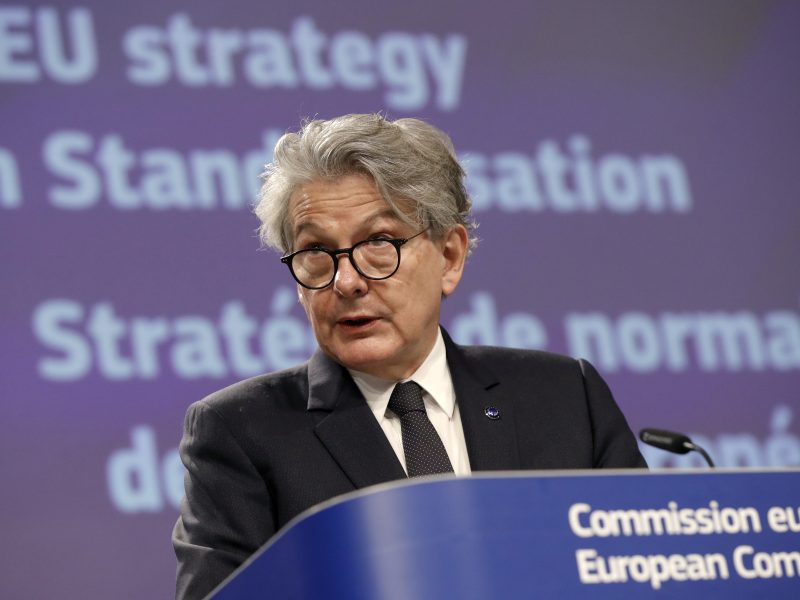 For the Commission, the growing weight of non-European actors in the European standardisation bodies raises the risk of decisions being made that go against EU interests. Thus, the strategy was accompanied by a proposed amendment to the Regulation on standardisation.

At the press conference, internal market commissioner Thierry Breton made the example of Galileo, the EU’s navigation system. In ETSI, a European standards organisation, the request to include Galileo in smartphones was rejected because of what the commissioner considered “undue influence” from non-European companies.

This was the only standardisation request that hadn’t been accepted by ETSI in their over 30-year history, Jorge Romero, ETSI Director-General, told EURACTIV. “But this was due to scope and timeline reasons and not to non-European influences.”

A Commission spokesperson told EURACTIV that “the technical committee dealing with the standardisation request indeed had many non-European companies as members.”

While ETSI includes representatives from 48 countries, only the votes of EU bodies count in case of disagreement. Moreover, only EU representatives give the final green light for legally-binding harmonised standards.

With this amendment, the national standardisation bodies will also be involved in the intermediary decisions, which have so far only been taken by ETSI members and/or the Director-General.

In international fora like the International Telecommunication Union (ITU), the European position is that technical standards should not be politicised, as they should be industry-driven. In ITU, the West might find itself outvoted as China has heavily invested in countries from the Global South with its Belt and Road Initiative.

ITU is the only standardisation forum where countries from the Global South can make their voice heard because governments mainly drive it. Companies from emerging economies do not have the resources to shape standards like Western and Asian companies.

However, as European companies see themselves outspent in European standardisation bodies, the European Commission calls for a heavier involvement of national delegations.

“The European standardisations strategy is at odds with the EU’s multilateral commitments to the WTO. In particular, the EU must base its standards on truly international standards,” said Rob Strayer, EVP at the Information Technology Industry Council and former ITU Ambassador for the US.

American stakeholders are particularly puzzled at the European approach, calling on Brussels to counter China’s growing influence with a common front based on shared values.

“Political solutions are not the right solutions to solve this problem. If you’re not ahead in technology, you just need to build it, even if it takes time,” said Stefano Cantarelli, executive vice president at Mavenir.

The EU executive requests European standard-setting bodies to create harmonised standards for legislation, for example through the AI Act, Data Act and Cybersecurity Act. The Commission has not hidden its ambition to be a global rule-maker in the unregulated tech sector.

While the EU might enjoy a first-mover advantage in regulatory terms, it could find itself outpaced by non-European players regarding how the rules will be applied in practice. However, the Commission’s attempt to close the standard-setting process might become a dangerous precedent for other jurisdictions.

“There is no single thing that can lead to more loss of value than fragmentation of technical standards. It could lead to a delay in technological advances of 5 to 10 years,” Vodafone’s Tenorio said.

Europe’s standardisation strategy inserts in a context of geopolitical tensions between the West and China. The politicisation of technical standards might have a substantial detrimental value on technological development, reducing scalability and competition.

“The Commission supports the work of international partnerships developing global standards and avoiding fragmentation of the standards,” the spokesperson added.

Europe’s falling behind is certified by the massive delay in the rollout of 5G networks compared to China and the United States. Meanwhile, the EU is facing a balancing act between trying to regain a leading position and keeping things together.

“Digital sovereignty does not mean isolation. It means being able to produce what you need when you need it. A possible way to address this would be investing in R&D to develop the most effective solutions that would then spread worldwide as industry standards,” Romero of ETSI concluded.