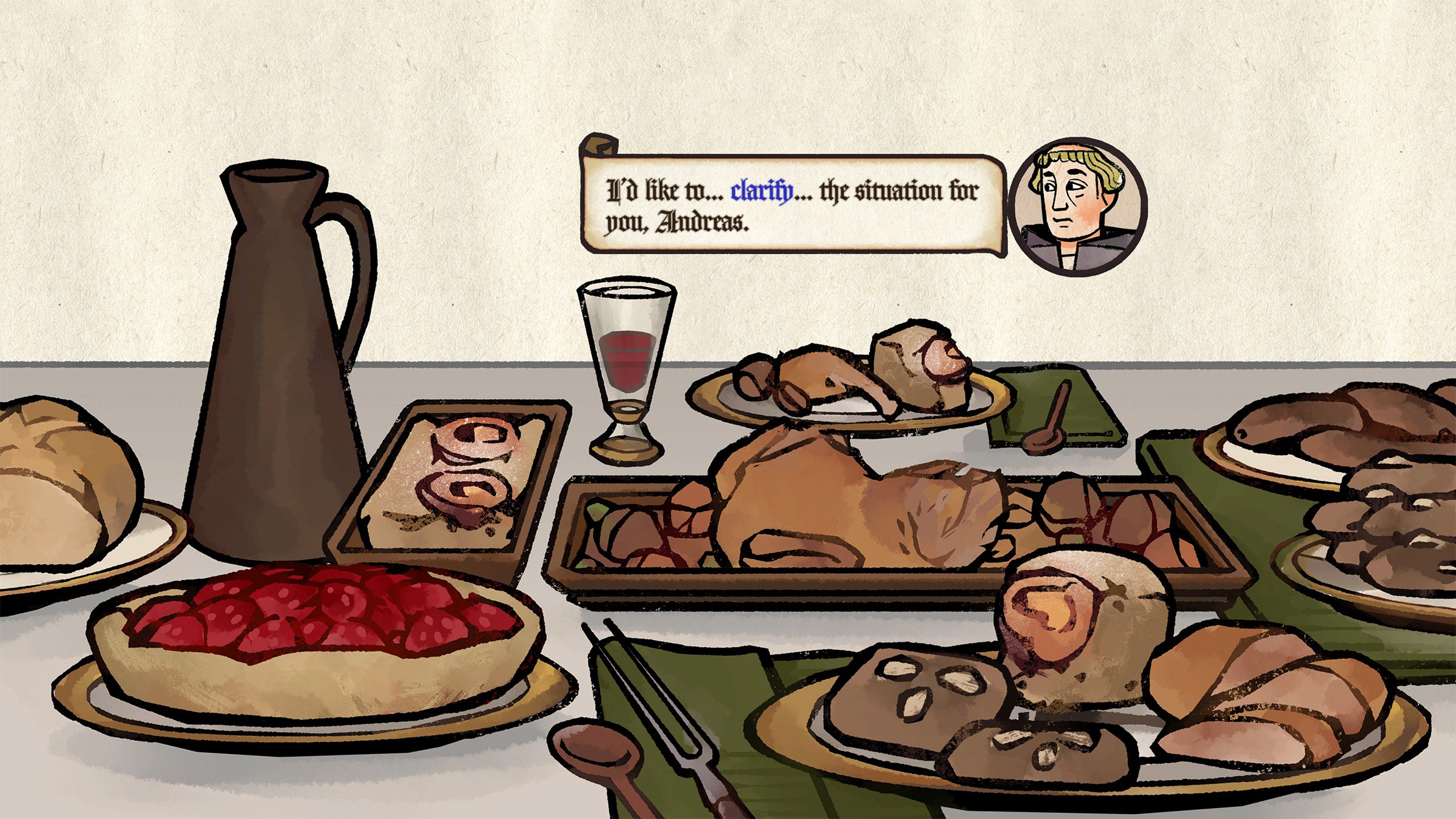 The murder mystery is a plot device that’s quite similar to how you uncover history anyway. Was that conscious?

Yeah, absolutely. Every game other than this one that I’ve worked on, violence and combat mechanics are really central. There’s a lot of leveling up and party management, and things that intentionally take your brain to a different place. With narrative adventure, it’s just about character interactions, really. So how you interact with people, the choices you make, the consequences of those choices.

Let’s talk about the game’s art style, which is this mix of medieval manuscripts and early print wood cuts.

Absolutely. Again, this is a time in transition. So it’s not that manuscripts are no longer being produced, but they’re produced in smaller and smaller numbers. They were no longer typically produced by monasteries. They were made by trade guilds, like the Guild of St. Luke, or individual artists like Andreas. Historically, Albrecht Dürer is probably the most famous example. So print is taking over, manuscripts are going away, literacy is rising.

But with that, there’s also a perfusion throughout Europe of all sorts of books about all sorts of things. One of the craziest examples from this time period is the Malleus Maleficarum, or Hammer of Witches, which is a witch-hunting manual. It was condemned by the church, but people were obsessed with it, because it talked about demons and how women were all witches, or have this great proclivity for it. And so there was this increased fear and danger of the spread of this stuff.

But specifically, with regard to the art, the creation of art is sort of central to a lot of the elements in the story. We try to tie that to how the characters and the world are rendered. So we use a lot of the woodcut style for how our environments are portrayed.

Our art director, Hannah Kennedy, looked a lot at the Nuremberg Chronicle, which is a large compendium. It’s hard to even describe; books are really weird in this time period, because they wander all over the place. But it had a lot of illustrations of towns, many of which were reused and had no relation to the town itself. But we use examples of that as perspective for how we build our environments.

And to bring the characters to life too?

Our characters, the older characters, especially, are rendered in more of an illuminated style. So they are painted, and as they get older, they actually lose chips of paint from them in the game. So you’ll see wear on them. And then our younger characters are all printed or made in that style. So it looks like a dark black outline filled with color, which is a different approach.