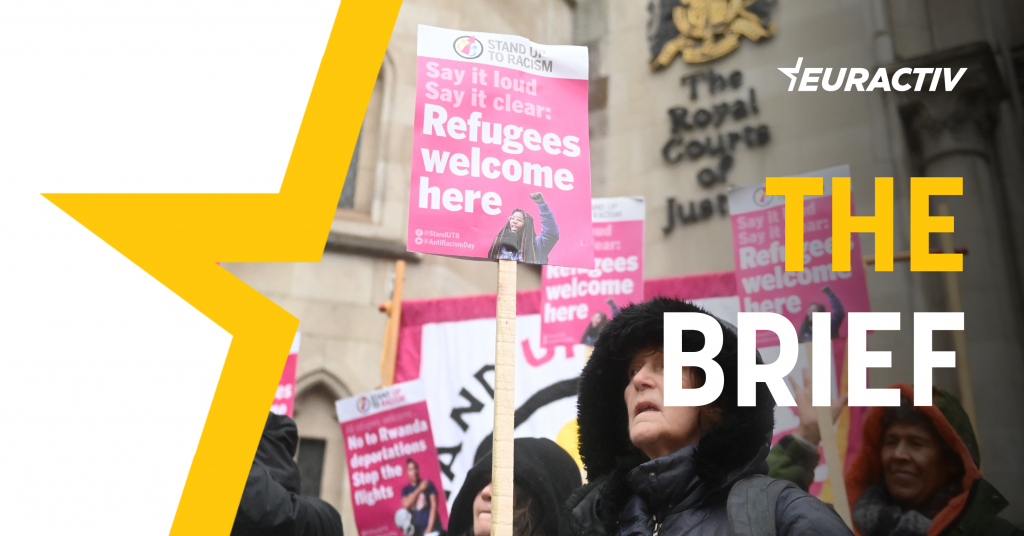 Shock and dismay were the reaction of civil society groups to the ruling by the High Court in London earlier this week that the UK government’s plan to deport migrants to Rwanda is lawful.

The court ruled that the scheme did not breach the UN’s Refugee Convention or human rights laws, despite civil society groups arguing that it denies the human right to seek asylum.

Although the ruling will certainly be appealed, dragging the process out for an unspecified amount of time, and certainly well into next year, it is now increasingly likely that Rishi Sunak’s government will eventually be given the green light to start sending planes to the African country.

There has been silence from the European Commission since the judgement, although it had previously been publicly critical of the UK’s scheme, as well as that of EU member Denmark, with Paul Kagame’s government. That silence is not just because the UK is no longer a member of the bloc.

In truth, the EU is not in a strong position to lecture the UK, or anyone else for that matter, on cash-for-migrants policies. Leaving aside the €6 billion Brussels has promised to pay Turkey for keeping asylum seekers from travelling to Europe, the bloc has its own structures with African states, including Rwanda.

For example, the last several hundred asylum-seekers intending to travel to Europe from Libya were instead sent to Rwanda to have their claims processed as part of an Emergency Transit Mechanism (ETM) in Rwanda for refugees and asylum-seekers.

The ETM was developed by the African Union, the EU, and the UN as a task force to “save and protect the lives of refugees and migrants along migratory routes and, in particular, inside Libya”.

Both in concept and reality, this EU-backed programme is not much different from the UK’s plan to pay the Kagame government £120 million to admit asylum seekers.

While repeated attempts to re-write the EU rules on immigration and asylum and persuade member states to share the burden on migrant arrivals have floundered, policies that effectively outsource border control to third countries are increasingly popular despite tending bring about only marginal reductions in the numbers of boats crossing the Mediterranean and Aegean Seas.

It is almost certain that this week’s ruling at the London court will encourage other capitals in Europe to pursue similar cash-for-migrants agreements with third countries.

But it is a delusion to think that these will work.

Until European governments have the candour to admit that they are essentially treating an open wound with a band-aid and start actually addressing the political, economic, and now climate, root causes of migration from Africa and the Middle East, this migration doom loop will continue in perpetuity.

The UK government’s Settlement Scheme for some 2.5 million EU nationals living in the country has been declared unlawful in a major High Court ruling on Wednesday.

EU environment ministers called on Tuesday for increased flexibility and finance to achieve the goals of a new law aimed at restoring Europe’s nature.

A consortium of Italy’s Eni and France’s TotalEnergies has found more natural gas off Cyprus, boosting Europe’s hopes for a clean break from Russian gas.

An international labour leader and a former EU commissioner admitted that they had received respectively €50,000 euros and €60,000 from an NGO at the heart of an investigation into allegations Qatar tried to corrupt the European Parliament.

Last but not least, do not miss our end-of-year Green Brief: A year of EU energy policy in review.