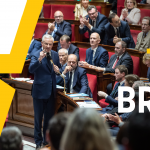 As we all know, when it comes to politics, France and Italy already have points in common. But for several months now, I got the feeling that French politics is seriously Italianising itself.

First of all, in its “political drama” aspect: To be clear, in Italy, as in France and everywhere else, politics often has a theatrical side — and that’s also, in part, why we like it.

But in recent years, trash scenes on talk shows, entertainment programmes and in parliament, which used to be the preserve of Italy, have started to spread to France.

Recently, for instance, a star TV presenter insulted a left-wing MP live on air for criticising the boss of the channel where he works about his dubious business dealings in Africa.

“A**hole,” “you’re a piece of s**t” — These remarks reminded me of the golden years of Silvio Berlusconi’s television, when journalists and presenters, at the mercy of their boss, devoted themselves, body and soul, to take on the political opponents of the great leader.

All this contributes to an ever-greater polarisation of politics. Everyone is absolutely against everything their opponent has to offer. German friends: Teach us to compromise!

And even when politicians have the misfortune to agree on something, they resort to rhetorical contortions to justify their support.

With one difference – when it comes to governing, the Italians are less “picky” than the French. With the victory of Giorgia Meloni in September, all the existing parties with a minimum of political weight have been in government at least once in the last decade.

And this brings us to the third point: Since last June, France has discovered the joys of (real) parliamentary regimes and political instability. It is true that the French government is holding on, but thanks to ad hoc alliances or constitutional tools created to avoid instability.

And for Italy today, it is kind of the opposite, with a fairly solidly anchored government and a coalition that won the elections by itself. We’ll see how long it lasts, but still…

Another element of the Italianisation of French politics is the gradual erosion of the barrier between the right and the far right.

Despite their harsh words on security or immigration, for example, former presidents Jacques Chirac and Nicolas Sarkozy would never have said the things that the leaders of the parties they founded are saying today.

Both Éric Ciotti and Bruno Retailleau suggest, more or less explicitly, that they do not reject the idea of a “union of the rights” or, to be clear: a union of the right and the extreme right.

Ciotti is the same one who explained that he preferred far-right anti-immigration candidate Éric Zemmour to Emmanuel Macron in case of a second round between the two. On hearing that, Chirac must be rolling over in his grave while Sarkozy has become a supporter of Macron.

The parallel with Italy is quite apparent, given the alliance between the right and the far right for several years. Thanks to whom? A certain Silvio Berlusconi…

Added to all this is the fact that many French parties now feed into, and exacerbate, anti-elite sentiments – against Europe, the media, the “established order”, sometimes even against science — particularly on the far right and within the radical left.

The same thing happened for many years in Italy with the Lega and Fratelli d’Italia, and the 5 Star Movement, before it became institutionalised.

And what was the result in Italy? Most recently, the victory of Meloni, the first far-right leader of an EU founding member. Does this mean Marine Le Pen will become the second in 2027?

Today’s edition is powered by AWS

AWS and comprehensive data protection in the cloud

The UK egg market is cracking under the strain of mounting costs as the sector battles one of the worst-ever outbreaks of avian flu, leading supermarkets to ration eggs and look to the EU to fill the market gap.

Farmers breeding bulls for fighting are currently eligible to receive subsidies from the EU under the Common Agricultural Policy, but European lawmakers and campaign groups contest this long-standing issue.

Brussels is increasingly using emergency legislation and so-called ‘delegated acts’ to implement its Green Deal agenda, a growing trend that is causing unease among EU co-legislators who are denied their democratic right of scrutiny.

A French court decision to halt the publication of an investigation by Mediapart into political corruption has roused lawyers and other media outlets who say it goes against the main principles of French and EU press law.

The Scottish government cannot hold a new referendum on independence without the consent of the UK government, the Supreme Court ruled on Wednesday.

Don’t forget to check out the latest Green Brief: If you thought COP27 was bad, brace yourself for COP28, and the Health Brief: Nothing healthy at COP27.