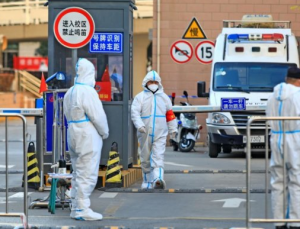 Beijing: Shanghai, the global financial hub and China’s biggest city, has become the epicentre of COVID-19 cases in the country as it set a record of six-straight days of logging around 20,000 cases, as the city ramped up mass testing to tackle the rapid spread of the Omicron variant.

Shanghai with a population of about 26 million, which remained under lockdown for several days, has already conducted three rounds of mass testing.

The outbreak in Shanghai, caused by the highly transmissible Omicron variant of COVID-19, is becoming so serious that the city’s ruling Communist Party sent an open letter to rally members to help front-line health workers in their quest to find and snuff out the disease, the report said.

It was the second letter since March 24 by cadres in the city where the party was established a century ago.

China has aleready rushed thousands of personnel from various medical services of the military to Shanghai in a similar move to contain the coronavirus in Wuhan, where COVID-19 first emerged in 2019, December.

Vice-Premier Sun Chunlan, a member of the party’s Politburo, has been in Shanghai since Saturday to oversee the city’s anti-pandemic work.

Shanghai has reported 114,000 cases since the latest wave of outbreaks started on March 1, recording more cases in a month than the previous two years combined.

Wednesday’s new infection numbers surpassed the 13,436 cases recorded on February 12, 2000 in Wuhan, where the coronavirus outbreak was first reported, the Post report said.

The city was under lockdown to enable health authorities to carry out a fresh round of mass tests since Sunday to spot every infection and break the transmission chain. The city had already undergone three rounds of tests involving every single resident, from April 3 to 6.

Meanwhile, chaos had broken out in sporadic areas since Shanghai’s lockdown. People jostled and fought for food at the Nanhui quarantine centre on Wednesday before authorities brought the mayhem under control, the Post quoted blog posts on social media.

“Trust in the local government has been eroded over the past few weeks since their pledge to protect people and ensure adequate food supply proved to be empty promises,” said Gordon Zhu, a Shanghai-based software developer.

“Many people are starving amid the shutdown and they are desperate for meat, vegetables and rice,” he said, the Post reported.

The coronavirus first emerged in the central Chinese city of Wuhan in late December, 2019. The deadly disease has killed at least 6,167,500 people across the world, according to Johns Hopkins University COVID-19 tracker. The world has also reported over 495,218,000 confirmed COVID-19 cases, it says.