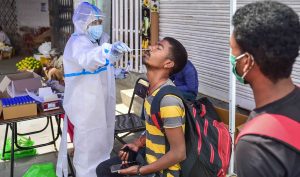 New Delhi: A total of 38 people have tested positive for the new UK variant of SARS-CoV-2 in India so far. This information was given Monday by the Union Health Ministry.          These include the 29 cases which were announced till Friday. The Health Ministry said all these people have been kept in single room isolation in designated healthcare facilities by respective state governments. Their close contacts have also been put under quarantine, the ministry said.

The NCBS, InSTEM in Bangalore, CDFD in Hyderabad, ILS in Bhubaneswar and NCCS in Pune have so far found no UK mutant virus, the ministry said. Comprehensive contact tracing has been initiated for co-travellers, family contacts and others.  Genome sequencing on other specimens is going on, it added.

“The situation is under careful watch. Regular advice is being provided to the states for enhanced surveillance, containment, testing and dispatch of samples to INSACOG labs,” the ministry stated.