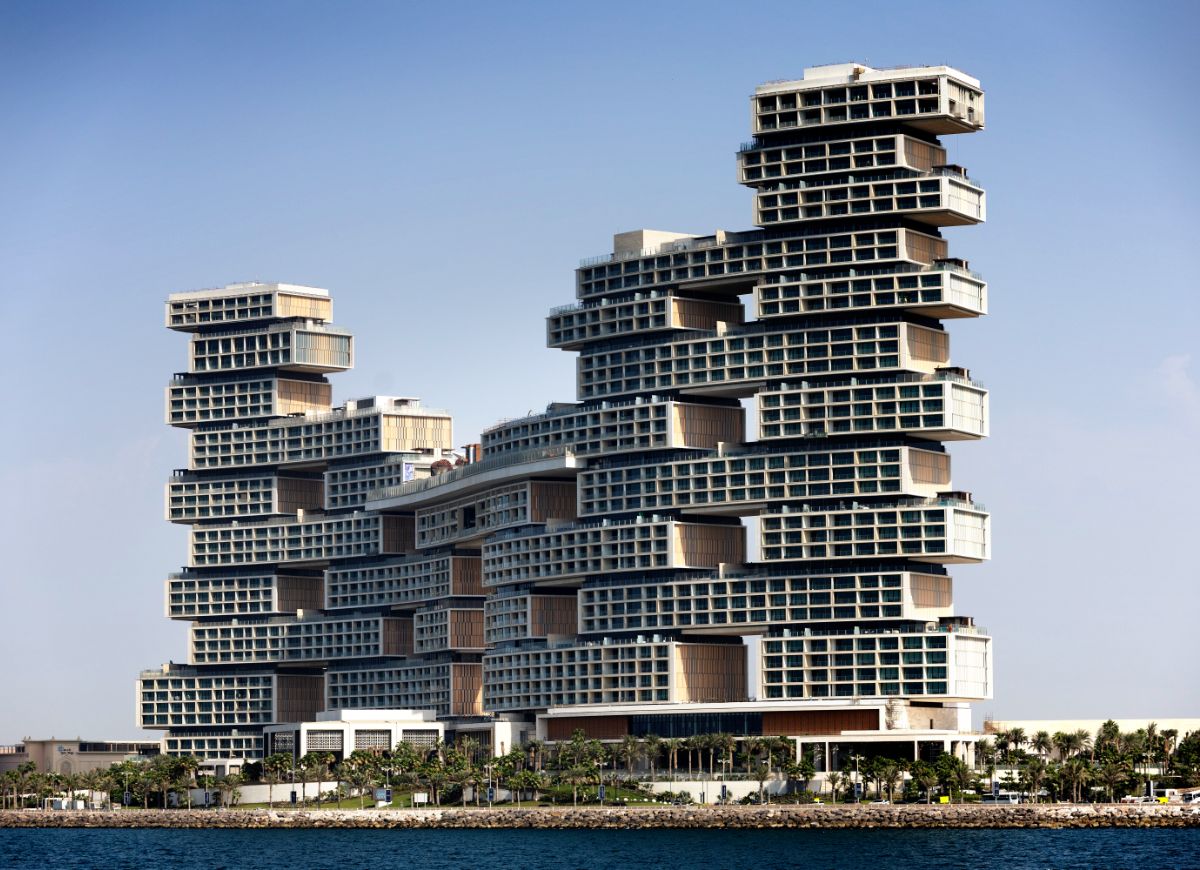 The elements of fire and water have been used as a central design theme in this innovatively conceptualised hotel, opening in January on The Palm, Dubai.

Some of the world’s leading architects and designers have collaborated on Atlantis The Royal, a striking luxury hotel that is poised to open in January 2023, signifying a new landmark in the modern metropolis.

The hotel will feature 795 rooms, including 44 suites with private infinity pools. Seventeen restaurants and bars are headed by some of the world’s most acclaimed culinary minds, including Heston Blumenthal, Gaston Acurio, Ariana Bundy, Costas Spiliadis, and Jose Andre. Nobu’s first pool and beach club will also open at the property.

Six individually stacked blocks are adjoined by a sky bridge, creating a distinct aesthetic which is emphasised by the illuminated openings between each block; while an elevated sky garden and swimming pools have been innovatively designed for guests to experience what would usually be on the ground, high in the sky.

James von Klemperer, KPF Associates President and Design Principal, said: “We were asked to dream big on this project. To create something unique and iconic for Dubai—and when I look at it now, I’m amazed by the audacity of the whole undertaking. I’m bowled over by what’s been built, with its vertical piling up of outdoor experiences in the pools, outside spaces and remarkable design features at every turn. The gardens in the sky, first imagined in sketches on paper, are now realised hundreds of feet above the ground.”

The London-based firm G.A Group (whose previous projects include W Shanghai, Corinthia London, and Palace Hotel Tokyo) was enlisted to create the interiors for Atlantis The Royal. Inspiration was taken from the nomadic Bedouin tribes of the Arabian desert, who would traverse the landscapes using water wells as navigation.

Water is therefore a strong feature of the hotel, with water features, sculptures, and blue colour palettes used throughout. An 11.5-metre-tall sculpture in the lobby, titled Droplets, represents the first drop of rain in the desert, while two Deluge cylindrical elevators are immersed in cascades of water. Hundreds of raindrop-shaped pendant light fixtures are on display in the lobby.

The world’s leading water feature design firm, WET, created several pieces for the resort based on the elements. The firm is responsible for stunning attractions such as the Fountains of Bellagio and the HSBC rain vortex at Jewel Changi Airport. At Atlantis The Royal, Firefalls sees two reflective walls of glass with rippling water and programmable plumes of fire; while Skyblaze is a 28-metre-high water and fire fountain, which sees water forms, fire bursts, lights, and performative music melded together to mesmerising effect.

SKS Studio and 40North are the talents behind the landscaping, which translates vertically to the towers as well as on the ground. Sky pool villas and sky terraces have been cleverly designed, inspired by Mozarabic courtyards, to be shaded from the floors above and ventilated by oceanic breeze and pools, which offer passively cooled spaces. The aim was to extend the period during which guests can comfortably enjoy the outdoors, from six to up to 10 months of the year.

Atlantis The Royal is set to open its doors in January, with bookings now available.