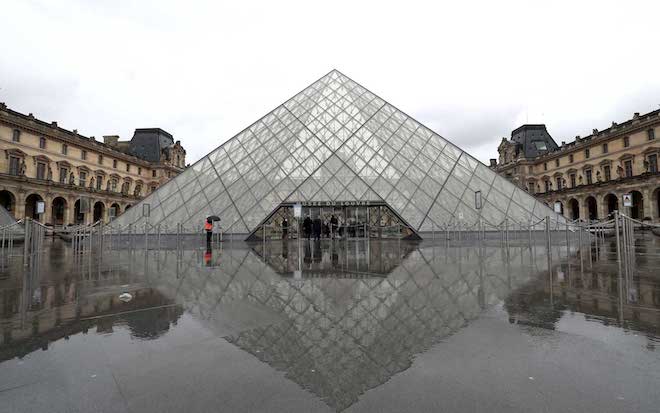 A person stands under an umbrella looking at the deserted courtyard outside the Louvre Pyramid, the main entrance to the museum which was once a royal residence, located in central in Paris on March 2, 2020. – The Louvre in Paris, the world’s most visited museum, was closed for a second day running on March 2, 2020, after staff refused for a second day running to work due to coronavirus fears, a union said. The Paris museum insisted that closure was not necessary in response to fears over the virus, which has spread to over 60 countries after first emerging in China late last year. (Photo by Ludovic Marin / AFP) (Photo by LUDOVIC MARIN/AFP via Getty Images)

The tourism industry has been hardest hit by the global health crisis; with air travel falling 95%, with $1.2 trillion of losses, it’s not just the airlines and travel companies that have been hardest hit, it’s also the luxury brands that rely on travel to generate a significant portion of revenues.

According to United Nations’ World Tourism Organization projections, there could be 1.1 bullion fewer international travellers in 2020 – a disaster considering Bain & Co calculated that 40% of personal luxury goods were purchased by visiting arrivals. 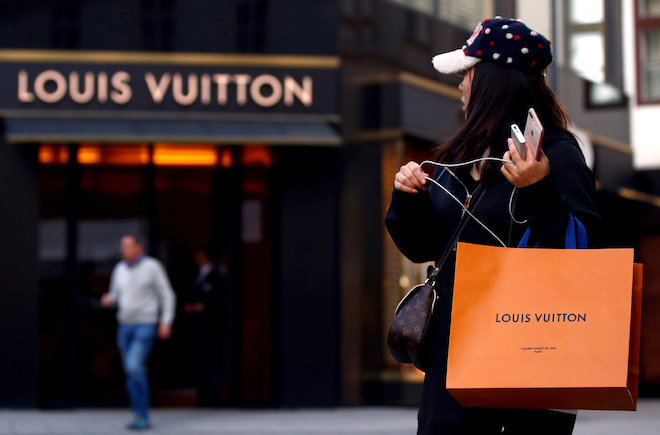 With international travel unlikely to recover before 2022, the main growth engine – Chinese shoppers – who accounted for 35% of luxury purchases in 2019 are also unlikely to contribute the same revenues as they once did. Not to mention, many of ethnic Chinese descent have been experiencing a wave of racist sentiment with perceived responsibility of spawning the global pandemic came allegedly from an exotic meal of Wuhan bat-flesh.

According to Euromonitor, the Asia Pacific region generated luxury goods sales worth $438 billion in 2019, more than any other region, but with prevailing lockdown measures in some countries, travel restrictions, reductions in consumers’ disposable income and low confidence levels, the sector’s recovery would be incredibly slow, if at all. Even as tourism slowly restarts in an increasing number of countries, it remains at a practical standstill in the majority of nations. 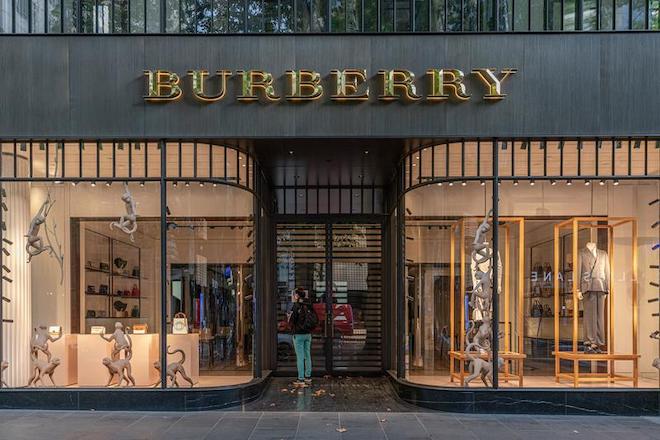 Burberry intends to shed 500 jobs worldwide as it grapple with the impact of the coronavirus on its business with sales across Europe and the Middle East plummeting 75% because of a steep decline in tourism.

With more luxury goods sales than any other region, the pandemic and the resulting economic crisis has only underlined the importance of Asian markets. Recording its first-ever GDP contraction during first quarter 2020, after 10 weeks of strict quarantine, China was the first country to enter and emerge from a full lockdown. With only 11% of Chinese shoppers consuming luxury goods in-country, it was anyone’s guess as to how the cessation of lockdown parameters would affect retail but it looked like “revenge spending” was in full swing when Burberry Chief Executive Marco Gobbetti announced in May that sales in the mainland were up double digits. That said, NYT reported last week that Burberry intended to cut up to 500 jobs worldwide as it continues to grapple with the impact of the coronavirus on its business with sales across Europe and the Middle East plummeting 75% because of a steep decline in tourism. Mirrored by a 70% drop in the Americas and 10% in the Asia Pacific region. 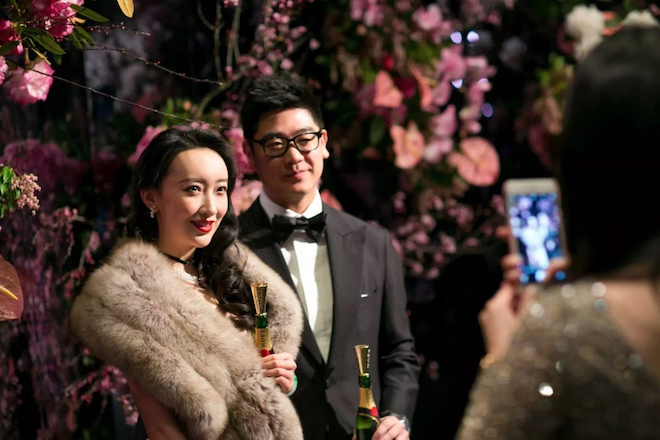 Pre-Covid-19, analysts were already projecting that a larger percentage of Chinese shopping would take place in country due to a government crackdown on “daigou” or personal shopping services where favourable tax incentives and unequal pricing policies led luxury goods in Europe costing significantly less than the same products within China. As conditions evolved, major brands Louis Vuitton and Chanel moved to equalised global pricing and while it has not completely removed the price disparity between Europe and China, it has significantly altered the cost-benefit equation for Chinese consumers.

“Our decision to invest heavily in growing our domestic business in Mainland China was particularly prudent and well-timed, given the recent sharp decline in Chinese tourism abroad and the increase in local consumption,” –  Tiffany Chief Executive Alessandro Bogliolo 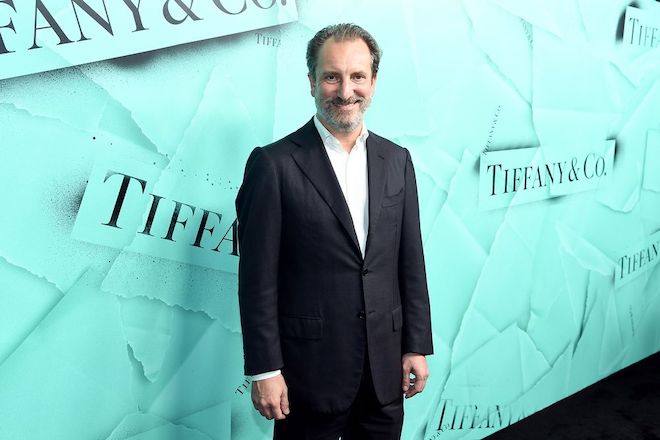 According to a Tiffany & Co earnings release, CEO Alessandro Bogliolo touted that sales in mainland China sales increased 90% in May (compared to the same period in 2019) following the lifting of the quarantine. However, analysts and veterans like President President Andrew Kieth of Lane Crawford are also quick to point out that whether this pent up demand is part of wider sales momentum and a sustainable pattern of consumption is entirely questionable.

Furthermore, as Hebei which neighbours Beijing enters a second partial lockdown as a result of a spike of infections, growing concerns of social contact unbalance the cost-benefit equation for a social activity like shopping. Enter live-streaming.

According to consultancy iiMedia,  live-streaming tripled its gross merchandise value (GMV) to $62.1 billion in 2019 and is projected to double again (projected $136 billion)  in 2020 thanks to the forced quarantine providing China’s big-spenders the catalyst for adopting once-nascent forms of internet commerce. 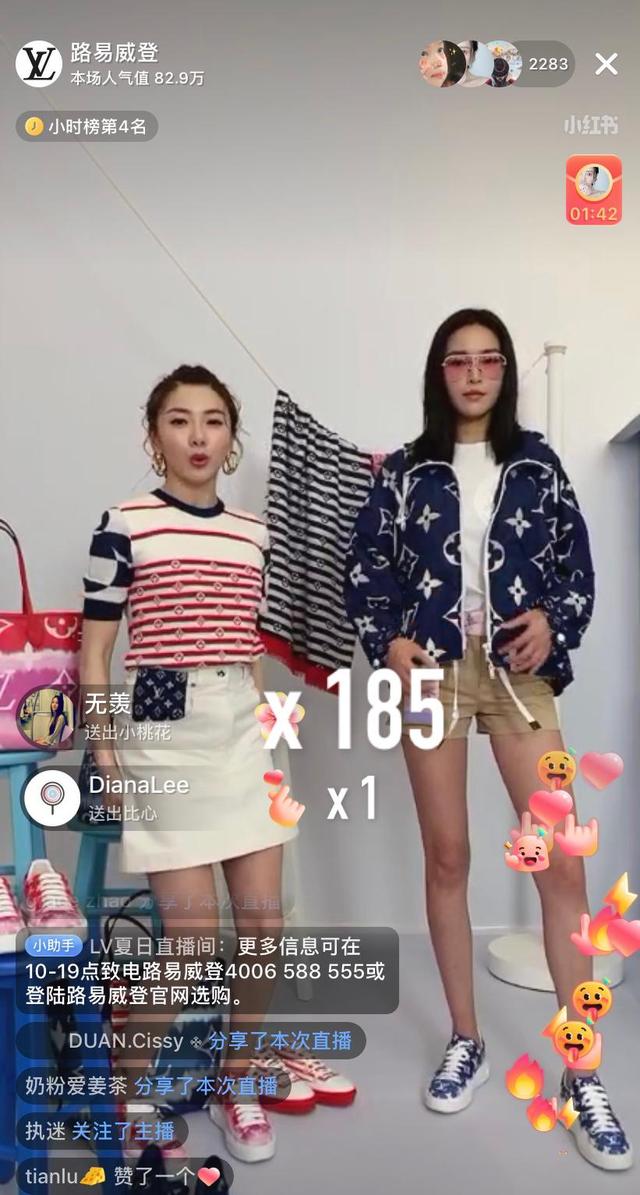 Live-stream e-commerce is much more than the 24-hours infomercials business model pioneered by Home Shopping Network and QVC. China’s combines QVC, Facebook Live and e-commerce platforms like Amazon into one, accessible info-tainment feed. But now, the mega revenues and a growing number of scandals has attracted the attention of the Chinese Communist Party.

For over a decade, Hollywood attempting to cash in on the market with the world’s most populous middle class has bent over backwards to meet Chinese standards of censorship targeting everything from bikinis to tattoos, and even perceived LGBT and homosexual content which the Party deems antithetical to wholesome Chinese values. For a while, live-streaming slipped under the radar but when Alibaba and JD.com, the country’s two biggest eCommerce plays reported a combined total of $136.5 billion live-stream sales in just under three weeks, the “grey-area” came under sudden spotlight.

First, China’s Ministry of Human Resources and Social Security recognised “live-streaming host” as a new profession. Second, the Cyberspace Administration of China (CAC) singled out high profile live-streaming apps like ByteDance’s Xigua among ten others for “problematic content” this month; in some instances, the CAC blacklisted particularly egregious Live-streaming Hosts, effectively banning their channels and content. While increased regulation formalises a previously informal network of social influence marketing, the truth of the matter is – government knee-jerk oversight also introduces a spanner in the works of brands who have pivoted to eCommerce and designed their own live-streaming strategies during the lockdown. Given the mercurial nature of government censors, it’s not entirely inconceivable that a brand, influencer or platform will invariably run afoul of some rules during the 60 hour work week, leading to potential interference or worse, political reprisals from zealous authorities.

The importance of live-streaming in the age of eCommerce cannot be understated: Jing Daily reported the number of Alibaba e-commerce merchants who used live-streaming doubled. In 2019, Taobao’s 4,000 livestream hosts sold over $15 billion USD worth of goods, up over 400% from a year earlier. In fact, when Kim Kardashian wanted to launch her perfume in China, she approached famed livestream influencer Huang Wei, who goes by the online persona – Viya, with an audience of 37 million viewers, the engagement and sales of top streamers are real, the regulations intended to police a once self-regulated industry still posts major risks for brands. Yes, new governmental oversight will tackle issues like the overwhelming number of customers (37.3%) reported having problems with purchases reported by the China Consumers Association. In real numbers, assuming top streamers, that number equates to millions of affected luxury consumers and the consequential knocks on brand reputation. Not forgetting to the abuse of the returns policy to inflate the perceived success of live-stream sales – some hosts and their agencies resort to using upfront fees to buy goods during the streams in order to inflate sales numbers and then returning the maximum allowed number of products via third parties before offloading the remainder to grey-market dealers and e-Commerce platforms. 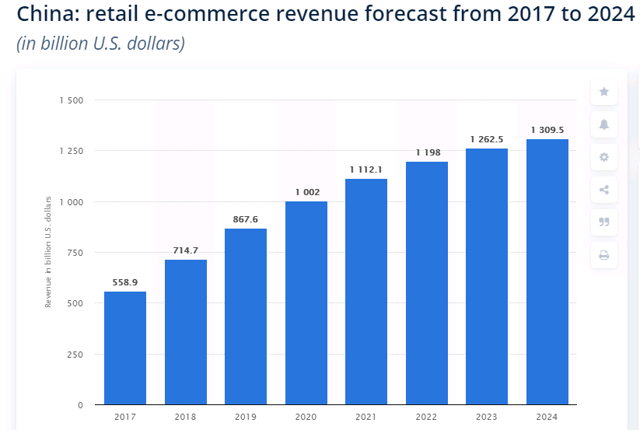 Writing for Seeking Alpha, LD investments posits that “cross border shopping is expected to emerge as a key growth engine for China’s ongoing consumption growth. With cross border purchases accounting for just 2.2% of the total online retail market, there is tremendous potential for growth and live-streaming is expected to play a key role in the market’s upward march.”

According to a report by Frost & Sullivan, Japan is perceived to be the most trusted country for cross border online shopping among Chinese shoppers (72%), followed by South Korea (60%), the US (55%), Australia (37%), France and Germany (both 26%), and the UK (23%). This essentially means that while physical tourism is at a stand-still, Chinese consumers are “crossing borders” to shop at trusted live-stream channels.

Hence, while live-streaming has become the way to go in the short to medium term, and very likely to remain a channel of distribution in the long term given that it streams products directly to the consumer, the reality is that brands have little control of these new sales channels, the technology platforms on which the streams are hosted and the personality cult of influencers – Suffice it to say, it is an odd paradigm in luxury marketing where every facet of brand marketing, communications and distribution is carefully stage managed and executed. The introduction of government oversight in this scenario is ultimately double edged and after all is said and done, all the revenues accrued so far, are only a third of pre-covid levels and it is far from certain when we are likely to return to previous benchmark sales.