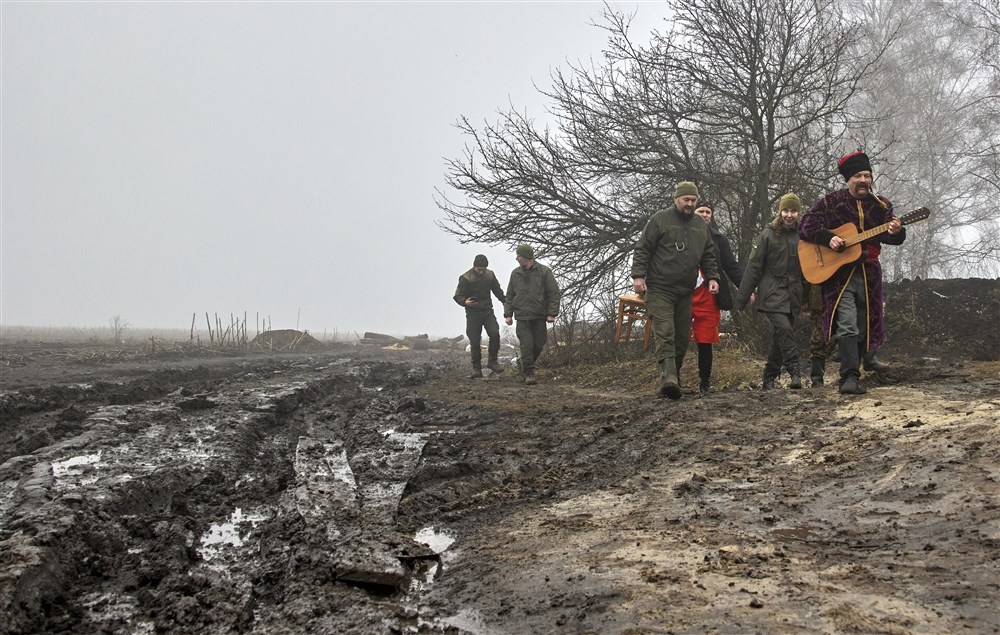 Russian forces shelled and bombed towns and cities in eastern and southern Ukraine on Tuesday (27 November), a day after Russia’s foreign minister said Kyiv must accept Moscow’s demands for ending the war or else suffer defeat on the battlefield.

Those demands include Ukraine recognising Russia’s conquest of a fifth of its territory. Kyiv, armed and supported by the United States and its NATO allies, has vowed to recover all occupied territory and to drive out all Russian soldiers.

Britain’s defence ministry said in its latest update of the situation in Ukraine that fighting was particularly intense around the strategic eastern city of Bakhmut in Donetsk province and Svatove, further north in Luhansk province. Donetsk and Luhansk, which make up the industrial Donbas, are both claimed, along with two southern Ukrainian regions, by Russia.

“Russia continues to initiate frequent small-scale assaults in these areas (of Bakhmut and Svatove), although little territory has changed hands,” the British ministry tweeted.

Reuters reporters saw fires burning in a large residential building in Bakhmut, while debris littered the streets and most buildings had had their windows blown out.

“Our proposals for the demilitarisation and denazification of the territories controlled by the regime, the elimination of threats to Russia’s security emanating from there, including our new lands, are well known to the enemy,” TASS news agency quoted Russian Foreign Minister Sergei Lavrov as saying late on Monday.

“The point is simple: Fulfil them for your own good. Otherwise, the issue will be decided by the Russian army,” he said, reiterating Moscow’s view that Ukraine is the pawn of a West bent on “weakening or even destroying” Russia.

Kyiv and its Western allies reject this stance, saying that Russia is engaged in a brutal, imperialist land grab in Ukraine.

The West has slapped sweeping sanctions on Moscow, including on Dec. 5 a $60 per barrel cap, imposed by the Group of Seven nations, the European Union and Australia to curb Russia’s ability to fund the war.

Finance Minister Anton Siluanov said on Tuesday Russia’s budget deficit could be wider than a planned 2% of national output in 2023 as the oil price cap squeezes export income, in the clearest acknowledgement yet the cap could hit finances.

After suffering a series of defeats in its “special military operation,” Russia is now seeking a battlefield victory by capturing Bakhmut, an industrial city with a pre-war population of 70,000, now reduced to about 10,000 mostly elderly residents.

Gaining control of the city could give Russia a stepping stone to advance on two bigger cities, Kramatorsk and Sloviansk.

“Our building is destroyed. There was a shop in our building, now it’s not there anymore,” said Oleksandr, 85, adding he was the only remaining resident there.

Nearby, 73-year-old Pilaheia said she had long gotten used to the “constant explosions”.

Over the past 24 hours, Ukrainian forces have repelled Russian attacks in the areas of two settlements in Luhansk province and six in Donetsk, the General Staff of Ukraine’s Armed Forces, said on Tuesday.

It also reported more Russian shelling of Kherson city in southern Ukraine, in the Zaporizhzhia region and of settlements in the Kharkiv region in the northeast near the Russian border.

Oleh Zhdanov, a military analyst based in Kyiv, cited heavy fighting around elevated areas near Kreminna in Luhansk and around Bakhmut and Avdiivka in Donetsk.

“The arc of fire in Donetsk region continues to burn,” Zhdanov said in a social media video post.

Ukrainian President Volodymyr Zelenskyy said that due to attacks on Ukraine’s energy infrastructure, nearly nine million people were currently without power – equal to about a quarter of Ukraine’s population.

President Vladimir Putin had planned a swift operation to subdue Ukraine when he ordered the invasion on Feb. 24, but Russia has suffered many embarrassing battlefield setbacks.

In the latest attack to expose gaps in Russia’s air defences, a drone believed to be Ukrainian penetrated hundreds of kilometres through Russian airspace on Monday, causing a deadly explosion at the main base for its strategic bombers.

Moscow said it had shot down the drone at its Engels air base, where three service members were killed.

The base, the main airfield for the bombers that Kyiv says Moscow has used to attack Ukrainian civilian infrastructure, is hundreds of miles from the Ukrainian frontier. The same planes are also designed to launch nuclear-capable missiles as part of Russia’s long-term strategic deterrent.

The Russian defence ministry said no planes were damaged, but Russian and Ukrainian social media accounts said several had been destroyed. Reuters was not able to independently verify the reports.

Ukraine has not commented on the attack, under its standard policy on incidents inside Russia. But a Ukrainian air force spokesperson said that Russia had transferred many planes from Engels to other airbases after the attack and that overnight, enemy aviation activity had “significantly decreased”.

A suspected drone also struck the Engels base on Dec. 5.

Such attacks – along with Putin’s decision in September to enlist hundreds of thousands of men in Russia’s first draft since World War Two – have brought the Ukraine conflict much closer to ordinary Russians, who, at least in the early months of the war could largely ignore it as a distant event.

Some Muscovites visiting ice sculptures in Gorky Park said the war affected their mood during the festive season.

“It is difficult to be cheerful when you understand that people out there are going through such awful times,” said one visitor who gave her name as Maria.

War in the west

Former Russian President Dmitry Medvedev, an arch loyalist of Putin given a new job this week, predicted war between Germany and France next year and a civil war in the United States that would lead to Elon Musk becoming president.

Medvedev, deputy head of Putin’s advisory security council, served as president during a four-year spell when Putin held the office of prime minister. In his list of predictions for 2023, published on his personal Telegram and Twitter accounts, he also foresaw Britain rejoining the EU, which would in turn collapse.

Since Russia’s invasion of Ukraine, Medvedev has reinvented himself as an arch-hawk, framing the conflict in apocalyptic, religious terms and referring to Ukrainians as “cockroaches” in language Kyiv says is openly genocidal. Last week he made a rare foreign visit to China, holding talks on foreign policy with President Xi Jinping.

“Medvedev’s Telegram posts have found at least one reader, and indeed an admirer: Putin,” Pastukhov, a political science professor at London’s University College London, wrote on his own Telegram.