No one actually drives their own luxury mpv; they get someone else to do it for them. So in that same spirit, we get up close and comfortable in the new Lexus LM 350.

If you don’t know the Toyota Alphard by name you’ve definitely seen plenty of them around and probably ridden in them more times than you can remember. They’re used by affluent families and businesses to shuttle their members around town – posh vans that then sit idly by the kerbside, sometimes for hours on end, as their drivers wait for the boss to come out from the office or meeting, madame to emerge from the hairdresser or the kids to tumble noisily from crammer or karate lessons, thence to be whisked home again.

Nobody who owns an Alphard -or Vellfire or whatever other name it goes by these days – ever actually drives the thing themselves; they leave that to somebody else. Which is why for this test (or should I say “ride”?), I’ve forsaken the driver’s seat for an extremely comfortable chair in the back and allowed the chap in the front – let’s call him James – to chauffeur me. And before I go any further, I should also explain that what I’m sitting in isn’t strictly an Alphard either, because after having magic dust sprinkled all over it by Toyota’s upmarket off shoot Lexus, this ultra-exclusive MPV goes under the name of LM350, the initials standing for “luxury mover”. 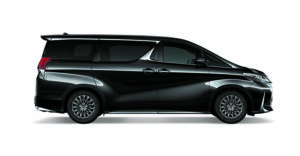 Excepting the enormous and garish grille that occupies most of the front of the vehicle, making it look as if it had been involved in an altercation with an over-ornate Christmas tree, the LM350 is recognisably an Alphard, albeit with one or two other giveaways, from the slashed triple-beam headlights and a chromed lightning-fl ash detail that shoots upward on the B-pillar and then rearwards above the window line, to the distinctive 18-inch “noise reduction” wheels (though how these actually cut sound I haven’t been able to ascertain).

Where Lexus’s efforts are far more in evidence are in the large cabin, which is easily accessed via electrically operated sliding doors. The vehicle I’m riding in isn’t the four-seat Emperor Suite edition, which features a pair of fully reclining massage chairs behind the driver, a full-height privacy divider, a 26-inch TV screen and a two-bottle (why stop at one?) champagne fridge. But even with two rows of seats in the back it’s still plenty palatial: twin power-operated captain’s chairs with extending ottoman footrest, picnic table and memory function; rear seats that can be folded away to create a large luggage space; stain-resistant leather all round; carpeting that a small dog could get lost in; individual controls for a battery of lighting options, including 16-colour ceiling illumination; a roof-mounted 12.3-inch multi-media display; and a fully opening moon roof (there’s another one up front). In fact, given the versatility offered by the additional row of chairs in the seven-seat version, I can’t honestly see why anyone would choose otherwise. Once James gets us moving, I really do start to get why luxury vans like this are so popular. Thanks partly to the turbine-smooth V6 engine that’s mated to a smart six-speed transmission, partly to the fact that the LM 350 is equipped with double glazing on all door windows that cut ambient intrusions almost completely, and partly to what I assume is my driver’s feather-like touch with accelerator and brake pedals, I’m quickly brought to a state of near somnolence, with my chair tilted back and my legs resting lazily on the extended footrest. But just to ensure I don’t nod off completely, James hooks up his iPhone and pipes some yacht rock through the 17-speaker Mark Levinson sound system. Mercifully he does this softly, because if he’d really wanted to wake me up he could have cranked up the volume till my ears bled.

I said I was happy to let someone else to the driving, but when we stop so that I can have a nose around inside the Lexus, I can’t resist taking the wheel for a just few minutes. So I’m able to report that, in his eight-way adjustable seat and with a sensation more of driving a car than a 5-metre-long van, James is almost as spoiled up front as I am when fully reclined behind him.

If only the LM 350’s exterior were as tasteful as its interior I think I’d be a total convert. But then riding in high style and comfort aboard this poshest of posh vans, as we cruise around town like an extremely low-flying private jet, does mean that I don’t have to look at it. 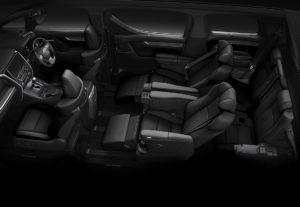