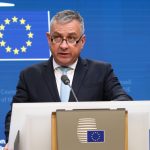 New measures to tackle the energy crisis, including speeding up permits for renewables and boosting solidarity between EU countries, have been left in limbo following a push to link them to a controversial price cap for gas.

At a meeting on Thursday (24 November), EU ministers agreed on the text of new emergency measures to tackle the energy crisis but will not formally adopt them until they find a political agreement on a newly proposed gas price cap.

“I am very glad we agreed on the content of both regulations, on joint gas purchases and solidarity measures and also on the permitting of renewable energy projects,” Jozef Sikela, the Czech minister who chaired the meeting, told the press conference after it.

“We are not opening the champagne yet, but put the bottle in the fridge,” he added.

The date for opening the champagne, as it were, should be 13 December when EU energy ministers will meet for their next emergency energy council with the aim to approve the gas price cap, which would allow the emergency measures to be adopted.

The decision follows significant pressure from pro-price cap countries. According to several diplomatic sources speaking to EURACTIV, countries in favour of the price cap gathered before the meeting to discuss their position. Here, it was agreed to treat the emergency measures and gas price cap as a package, added one diplomat.

“It seems to us that the three texts are very closely related,” Spanish minister Teresa Ribera explained to journalists ahead of the main meeting.

Because of this, it would be “extremely unbalanced” to adopt the emergency measures given the vacuum left by the “absolutely inapplicable, ineffective, off-target” price cap proposal from the European Commission, she added.

Discussions on a ‘joke’ price cap

According to Sikela, the discussion on the price cap was “quite heated”, with very divergent views on the level of the cap proposed by the European Commission.

The mechanism tabled by the Commission would only be triggered by two factors: prices on the main gas trading hub (the Dutch TTF) rising above €275 for more than two weeks and this trend not being reflected on the global market.

Both Ribera and Polish minister Anna Mowska labelled the proposal a “joke”, with many other pro price cap countries arguing the current proposal means it is unlikely to ever be used.

French Energy Transition Minister Agnès Pannier-Runacher said the Commission’s proposal is insufficient and falls short of the mandate it was given by EU countries in October.

Countries against the cap, particularly the Netherlands, also criticised the proposal.

It is “flawed”, Dutch minister Rob Jetten told journalists, adding: “There is a lot of risk for damaging the energy security of supply and also for the stability of the financial markets.”

The Germans, however, were more open to compromise.

“It must be ensured that such a price cap does not apply for too long, so that it does not damage the supply of gas. And all these variables can be talked about sensibly with each other. And that is what we are starting here today,” said German secretary of state Sven Giegold.

Following the wide-spread criticism of her Commission’s proposal, EU energy chief Kadri Simson was left to defend it after the meeting, saying that “designing this proposal has been a balancing act”.

“On the one hand, we need an effective measure to cap the gas price when it’s necessary. Excessive prices can cause severe hardship both to our citizens and serious damage to EU industry and businesses,” she said.

“On the other hand, the protection mechanism comes with risks,” Simson  continued.

For some countries, though, it is positive just to have a proposal at all, having spent so long fighting for it.

EU countries now have until Friday (25 November) to submit their views on it. The proposal will then be discussed by EU representatives before an attempt to reach agreement in December.

But until the gas price cap is agreed, the other emergency measures remain in limbo, at a time when European industry is calling on the EU to go faster.

Speaking to EURACTIV ahead of their lunchtime meeting with EU ministers, Harald Mahrer, the president of the Austrian Federal Economic Chamber WKO, and Vladimir Dlouhy,  president of the Czech Chamber of Commerce, said that speed is of the essence.

Without action to reduce the price of energy, Europe risks its industry relocating to countries in Asia or to the US where bills are cheaper, they warned. The bloc also risks fragmenting as different countries bringing in different support packages, they added.

Asked by EURACTIV what countries should do to tackle the crisis, Dlouhy said: “Be faster, take the decision now, try to find a compromise.”