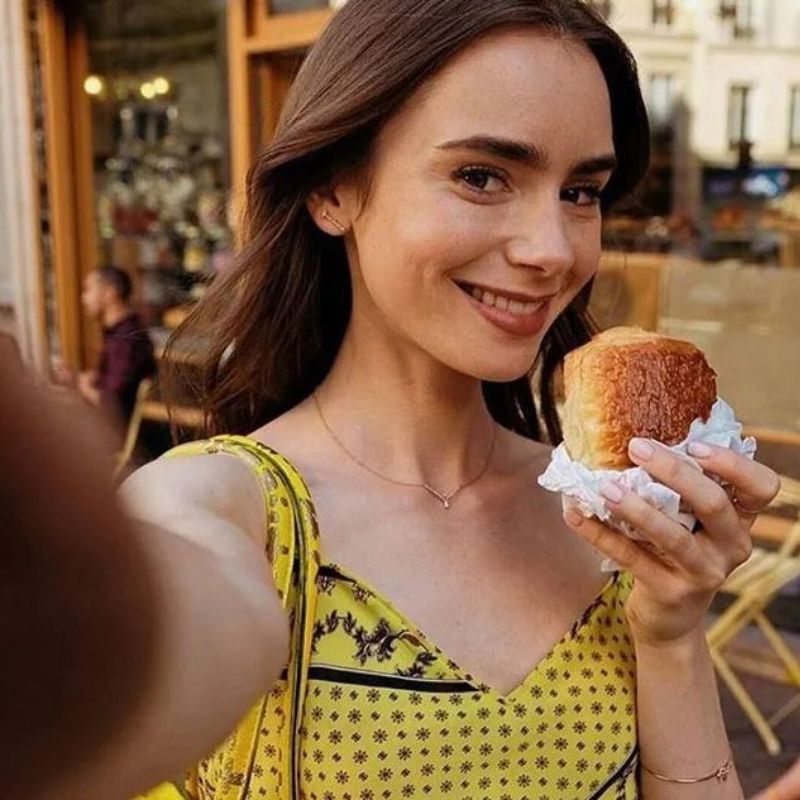 From buttery croissants from picturesque cafes to delicate omelettes made in well-seasoned cast-iron pans – Emily In Paris has served its audience with major food goals over the past few seasons. That said, you don’t have to hop on a flight to La Ville Lumière to get a first-hand taste of it all. Here’s a ready reckoner of authentic French restaurants in India that will do the trick deliciously.

“It’s Paris, everyone’s serious about dinner,” Mindy Chen states to a fish-out-of-water Emily Cooper in her first few weeks in France. “You’re in Paris now. I’m sure we can find you something better than peanut butter,” her dreamy chef-neighbour Gabriel adds. Over the course of the next few episodes, the now three-season hit Netflix series had the audience craving steaks, crepes, coffee, pan au chocolat, coq au vin, champagne, and more! Food has been a recurring theme through episodes, with grocery hauls featuring fresh ingredients and lavish dinner parties spotlighting elegant plates.

Add to this, the grand crack of a creme brulee – a delight to witness (and experience) – which went viral on social media. And while the French have expressed their resounding “Non,” to the authenticity of the representation, the fact remains that the show has piqued interest in the region’s cuisine like never before. That said, walking through the streets of the capital clad in a beret with a baguette in tow isn’t the only way to savour the flavours of Paris. In fact, several French cafes and restaurants across major cities in India recreate them all (and how!). Complete with classic creations and modern interpretations, a meal at these spots will have you exclaiming, “C’était vraiment délicieux!”

The capital city’s go-to for French desserts and viennoiserie, a walk through the doors of L’Opéra Salon De Thé will reward you with the most heavenly, appetite-tickling fragrances (cue Emily walking into a patisserie on her first day in Paris). Run by a French couple, the menu here is authentic, with delicacies like mille-feuille, macaroons, eclairs, quiches, brioches, tarts, tortes, and more! Besides, when in doubt, you can’t go wrong with their almond croissant. Pair these with a French vanilla latte and you’ve got yourself the whole Parisian experience.

An elegant fine-dining space in the bustling Aerocity, Reve brings the delicacy of French cuisine to every plate they serve up. The menu features both classic and modern interpretations. We’re eyeing the Coq Au Vin with chicken, bacon, glazed vegetables, and mashed potato – made popular by Camille’s father in the show. There’s also little bites (Amuse bouche) with pickled strawberry and goat’s cheese mousse, baked cheese souffle, simmered lamb stew with winter vegetables, and steaks. Round it out with their decadent vanilla creme brulee – a favourite of the show’s famous fashion designer client, Pierre Caudault.

Few places in maximum city can do justice to French viennoiserie and other classics like Suzette. From sourdough baguettes and brioche buns to quiches and croissants – there’s no dearth of delicious options to dig into here. The crepes – a popular option in the show as well – come in savoury and sweet renditions, a must-try. Those with sweet teeth – much like Emily – will enjoy sinking their teeth into French pastries like Paris Brest, Mille-Feuilles, Chocolate Tart, and Meringue Lemon Tart. The madeleines here sell out like hot cakes as well.

Listed in the 50 Best Restaurants Discovery List, this space led by Nick Harrison and Chef Alexis Gielbaum is Mumbai’s finest for all things French. The menu here is eclectic, with popular options being the Potato Gratin, Prosciutto Choux Puffs, and Steak Taretare. The Smoked Pork Belly with corn veloute and green apple relish as well as the Chateaubriand Steak with potato mille-feuille and creme fraiche come highly recommended as well. The latter is reminiscent of Emily’s first interaction with Gabriel – over the right temperature to cook a steak. Round the meal out with the classic Chocolate Cherry Tart.

Giving Bengaluru a taste of Paisian street food, this spot is led by French restaurateur Nicolas Grossemy. The menu promises fresh ingredients – a hallmark of the cuisine – and the most delicious bites. The sandwiches here are a must-try. However if you, like Emily, enjoy crepes, we recommend digging into their Salted Caramel and Biscuit creation. There’s also flavours like Dark Chocolate, Oreo, and Cookie and Chocolate. The Le 51 with star anise and licorice is a take on the popular Pastis 51 and an authentic beverage straight from the bottles of Marseille. That aside, their French Vanilla Biscuits pair like a dream with their decadent hot chocolate.

Perhaps one of the most popular destinations in the city for all things French – Cafe Noir has an extensive menu. The ambiance is laidback and breezy, reminiscent of the kind you’d find in La Ville Lumière. Popular here are the Quiche Lorraine, Croque Monsieur, and Chocolate Croissants. The Parisian Breakfast – with a choice of viennoiserie, eggs, bacon, and freshly-brewed coffee is a must-try. And if you’d really like to live out our Emily In Paris moments, we recommend the 3 Egg French Omelette with toasted baguette and grilled tomatoes – just how the leading man Gabriel makes it in the show.

Serving up authentic French delicacies with a side of stunning views of the ocean – La Plague is reminiscent of a Parisian bistro. It’s owned by two French former fashion designers – Serge and Florence – who arrived in India decades ago and decided to stay. The menu here is eclectic, with a popular option being their souffles – cheese to fish. They also offer up crispy sardines, prawn lollipops, and grilled calamari. Their ratatouille is a revelation as well. While here, don’t forget to dig into their desserts, featuring ingredients like dark chocolate, vanilla, and more.

Reminiscent of a charming Parisian bistro – The Assa House has the most scrumptious French bites on offer. The menu highlights include baked brie, potato dauphinoise, goat and blue cheese eclair, onion soup, and seared scallops. Their Paris-Brest, with praline-flavoured cream is a revelation. Pair these with their range of imaginative as well as classic cocktails.

A modern, chic French destination in White Town, Les Saveurs has the best baguette sandwiches in town – with the menu offering both vegetarian and non-vegetarian options. That aside, the Croques Monsieur with ham and cheese and Steak Au Poivre with brandy peppercorn sauce and sauteed vegetables are a must-try as well. The desserts here – be sure to ask the staff for recommendations – truly round out any meal and make it worth remembering.