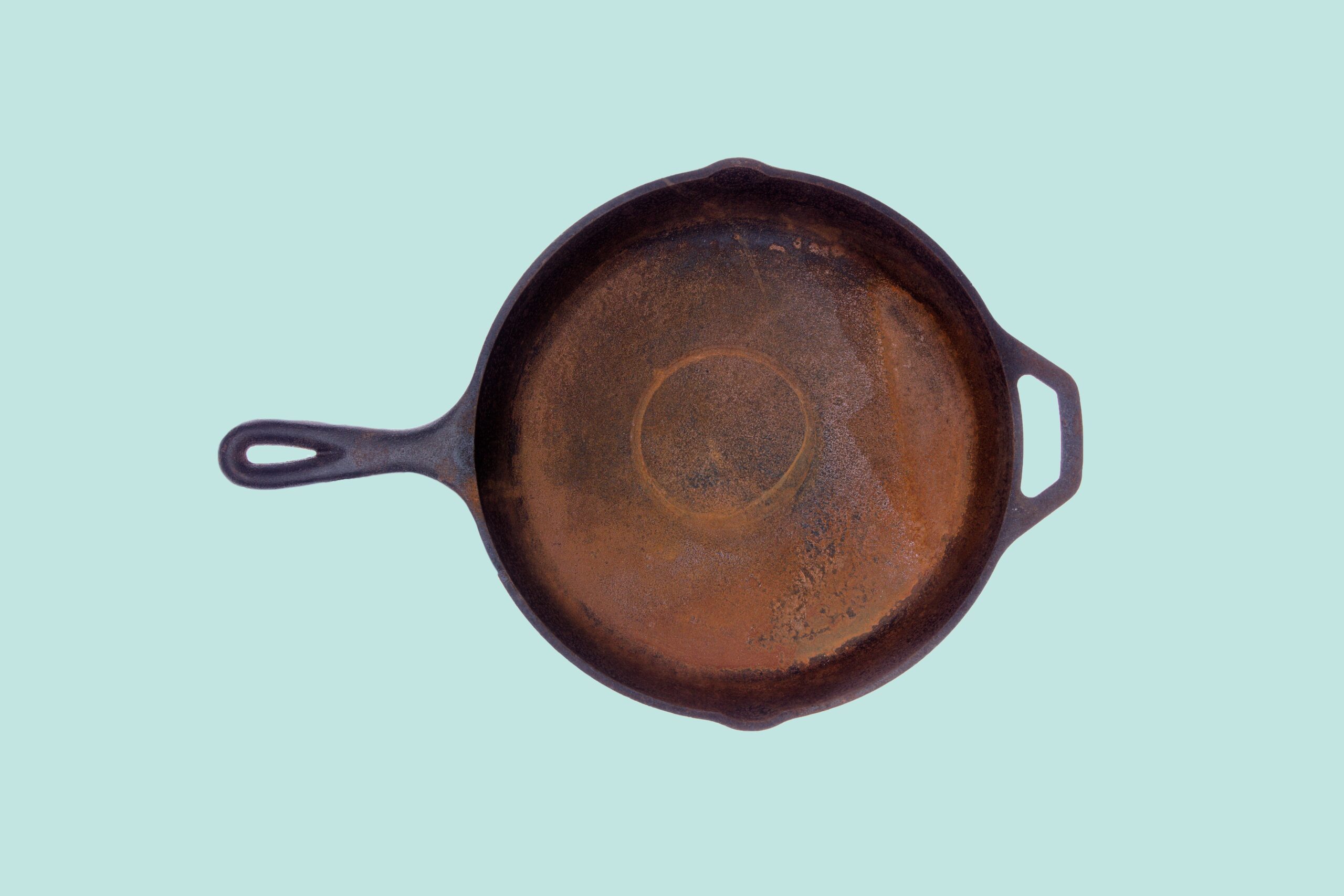 So you haven’t been seasoning your cast-iron pan—or worse, let it sit in a wet sink—and now it’s plagued with rust. Fortunately, there is an answer for how to get rust off cast iron, so don’t throw it out. Cast-iron cookware is meant to last a lifetime, so even if you picked up a far-gone skillet or Dutch oven at a tag sale, it is possible to restore it to peak form. A few steps might seem counterintuitive, but the goal here is to remove the layers of seasoning entirely, eliminating the rust so that you can start over with a fresh, even surface. Once your pan is rust-free, be sure to get in the habit of properly cleaning and seasoning your cast iron so that we never have to go through this again.

If you’re dealing with minor surface rust, you can probably skip this step, opting instead to use a scouring pad or kitchen towel to rub about ⅓ cup kosher salt into the surface of the pan until the spots of rust have been removed. For more serious cases, start with a vinegar soak. If you’re a *seasoned* cast-iron user who knows that submerging in liquid is a major no-no, this may shock you, but don’t worry—you’ll re-season your skillet before you cook with it again.

Mix equal parts water and distilled white vinegar and add it to a container that will fit your rusty cast-iron skillet, such as a bucket or a deep foil pan. Make sure the entire pan is submerged in the mixture, handle included. Check the pan every 15 minutes or so and remove it from the solution once the rust easily flakes away. This process can take as little as an hour or up to eight hours; frequent check-ins are important to ensure your skillet doesn’t soak for longer than necessary. The vinegar solution will dissolve the rust, but once that’s gone, it can penetrate further and start eating away at the original cast surface of the pan, the ultimate death sentence for your skillet. If that happens, retire it to a piece of farmhouse-chic kitchen decor.

2. Scrub and wash it thoroughly.

Wash your pan with a drop of mild dish soap and warm water, and clean away any lingering rust with a mildly abrasive sponge, like a green scrub pad or this Kamenoko Tawashi scrubber made from palm fibers. It may take some elbow grease, depending on the severity of the cast iron rust. Always use warm water to clean your cast iron after cooking, so it doesn’t warp or crack from a shock of cold, and here it’ll help speed up the drying process, too. Despite the myths, it is okay to use a small amount of soapy water on cast iron at any time, especially at this point, since there’s no seasoning to damage.

Dry the pan immediately and thoroughly with a kitchen or paper towel. Set it on the stovetop over low heat for a few minutes to dry it further.

Now you’ll need to season your clean cast-iron pan to restore the protective layer of fat molecules that bind to the pan, creating the cast iron’s nonstick surface and signature dark matte finish.