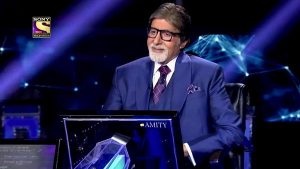 Mumbai: Amitabh Bachchan has wrapped up the current season of the quiz show, Kaun Banega Crorepati (KBC). The veteran actor took to his blog to inform fans that he has concluded the shoot of KBC season 12. “I am tired and retire… my apologies … it’s been a very long last day of KBC shoot. I shall make up tomorrow. But remember this… work is work and must be accomplished with the entire sincerity at one’s disposal,” Amitabh Bachchan wrote in his blog post.

“The affection and love created gives a farewell to the last day of the shoot… they all assemble together… the wish is to never stop but to keep going on. I do hope this can happen again soon, the crew and the team were so caring and hard working. It was quite a stretch to pull away from the sets… and all the team gathered round in fond remembrance of the months spent together and the efforts made by each,” added Big B as he is affectionately called.

“Love, care, affection and gifts of appreciation exchanged hands and there is extreme gratefulness for the gesture from the entire team… its moving… and tears up… but… tomorrow is another day,” he signed off.