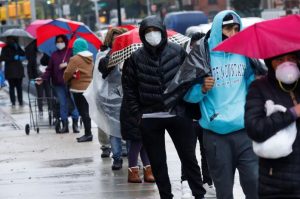 Stockholm: As many as 5,400 Swedes may succumb to Covid-19 by the end of next June, according to a new study. The study by the Stockholm Region was aimed to estimate the risk of mortality in Covid-19 when the restrictions have been lifted and the spread of infection is expected to increase during the winter, Xinhua news agency reported.

So far, Covid-19 has claimed more than 15,000 lives in the country, but this number could increase dramatically as the virus spreads among unvaccinated individuals, an expert told Dagens Nyheter newspaper on Thursday.

Meanwhile, one of the report’s authors Stefan Fors told the newspaper that although more than 90 per cent of over-60s are vaccinated, it is still likely that the most deaths will occur among the elderly.

Nevertheless, young people are also vulnerable, said Fors, an administrator at the Center for Epidemiology and Community Medicine.

“As long as we have a spread of infection, we will also see deaths among unprotected children and young people,” he added.

More than 20,000 individuals may need hospital treatment, which could once again place severe strain on intensive care units.

Sweden was late to recommend face masks to curb the spread of infections, although these were eventually introduced.

However, most coronavirus restrictions have been removed over the last couple of months, with shopping centres, nightclubs and restaurants as busy as ever, and face masks rarely seen on public transport. Sweden’s Public Health Agency fears this situation could lead to another wave.

Meanwhile, Fors warned that vaccine uptake has decreased considerably across the country, and almost come to a halt in the region of the capital, Stockholm.

Although 5,400 deaths by next summer is a worst-case scenario, Fors explained, unvaccinated individuals are almost guaranteed to be infected at some stage.

“We assume that everyone who does not have protection will be infected during the winter and spring. It is unlikely that we would get such a high spread of infection in such a short time but in the long run, it is not unbelievable, because if you have no protection, you will probably sooner or later get the disease,” Fors told the newspaper.

Numbers could be kept at a lower level should more people get vaccinated, he said.

Till date, more than 81 percent of all individuals aged 16 or over have had two doses, and 35 per cent of those aged 12-15 have received at least the first dose.

Since the beginning of the pandemic, around 1.18 million individuals have tested positive for Covid-19 in Sweden, but since November 1, it is no longer recommended that vaccinated individuals should be tested even if they have symptoms.

The Swedish government appointed last June a commission to investigate the country’s response to the Covid-19 pandemic.

“Sweden’s handling of the pandemic has been substandard and marked by tardiness,” the commission said in their second report, presented on Octember 29.

Testing was one of the areas where the authorities had failed, the report said.

“It can hardly be described as anything other than a disaster that a discussion on liability and financing contributed to the fact that no large-scale sampling took place until the first wave was over,” said the commission.

Its final report is scheduled to release in February 2022.