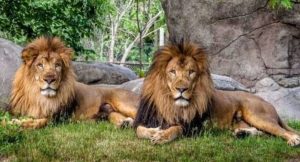 The AVS, which is under the National Parks Board, said that the four lions, as well as an African lion at the Singapore Zoo, had exhibited mild signs of sickness including coughing, sneezing and lethargy on Saturday and Monday respectively.

The testing for the African lion that had shown signs of sickness is ongoing.

According to the newspaper, the AVS has issued an order under the Animals and Birds Act to Mandai Wildlife Group to isolate all nine Asiatic lions and five African lions in their respective dens.

Mandai Wildlife Group, formerly named Wildlife Reserves Singapore, manages the majority of zoos in the country, including the Night Safari and the Singapore Zoo.